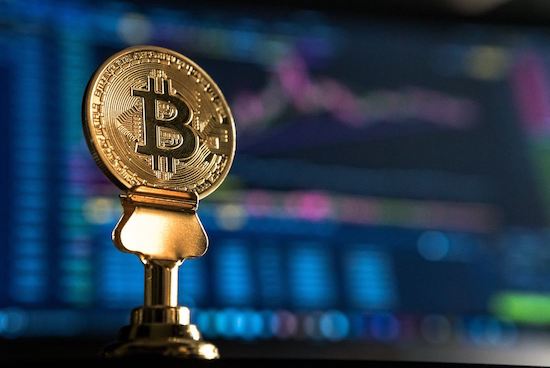 On the last day of July, Bitcoin has shrugged off yesterday's alarming news of the US economy contracting by 32.9% in the second quarter of 2020. The lack of growth of the US economy has been linked to job losses and low consumer spending brought about by the economic effects of COVID19.

When news broke of a contracting US economy, the automatic response was one of caution as such information had the ability to drop the value of Bitcoin in an instant. Also yesterday, the big tech companies of Amazon, Apple and facebook released their quarterly earnings reports that propped back the stock markets. The positive news from the big tech companies also had a direct effect on Bitcoin which has since firmly regained the $11k price level. At the time of writing, Bitcoin is valued at $11,160 – Binance rate.

Also to note, is that Bitcoin price is following a price prediction postulated by the team at Bloomberg in early July. According to the research team at Bloomberg, the number of active Bitcoin addresses point at BTC hitting $12k. They explained:

The number of active Bitcoin addresses used, a key signal of the 2018 price decline and 2019 recovery, suggests a value closer to $12,000, based on historical patterns.

In addition to all the positive news surrounding the crypto markets, 2020 might become the last year Bitcoin is ever valued at under $10k as shall be explained.

According to Bitcoin analysis done by Timothy Peterson of Cane Island Alternative Advisors, BTC’s value can be modeled using Metcalfe’s law. As earlier explained, Metcalfe's Law is primarily used in the Telecoms industry and Mr. Peterson has expanded on it in his analysis of Bitcoin.

Furthermore, Mr. Peterson has a very elaborate and simple chart that gives mid-November 2020, as possibly the last time Bitcoin will be valued at under $10k. Below is one of his Tweets proposing such a possibility for Bitcoin. 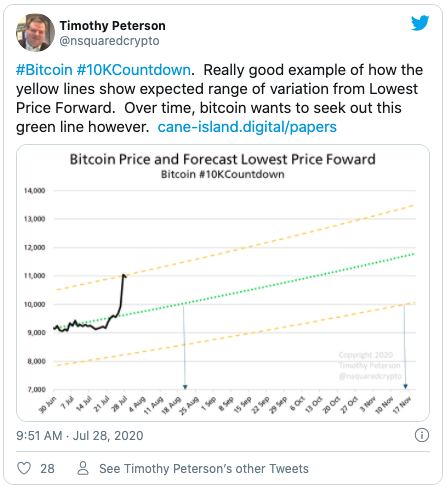 With the Fed and European Central Bank continually printing fiat, more investors are flocking to safe-haven assets such as Gold, Silver and Bitcoin. This fact coupled with the recent bullish news of Visa, Mastercard and Paypal finally embracing crypto, it can be concluded that Bitcoin's general trajectory is up henceforth.

As with all analyses of Bitcoin, traders and investors are advised to do their own research and use adequate stop losses when trading Bitcoin.