The team at Weiss ratings have concluded that Monero (XMR) is losing its appeal as the choice coin for privacy-centric crypto users. The same users now prefer ZCash (ZEC) due to the addition of new features through the recent Heartwood upgrade. The team at Weiss Ratings elaborated on the shift toward ZEC via a tweet that stated the following.

#Zcash has successfully hard forked in the planned network update “Heartwood.” Now, miners can receive transactions directly to their private address. Privacy coins are very important for the space, and Zcash is overtaking #Monero as the go-to privacy coin. #XMR #ZEC

The mentioned heartwood upgrade was activated at block 903,000 of the ZCash network on the 16th of July at approximately 11a m UTC. This upgrade enables more third-party integrations and better privacy through shielded coinbase. Furthermore, the upgrades were as a result of the two ZCash improvement proposals of ZIP-221 and ZIP-213.

Flyclient, specified through ZIP 221, enables efficient proofs of Proof-of-Work for light clients. In addition to enabling improved light-client wallets, this improves many cross-chain protocols. This ZIP specifies modifications to be made to the Zcash block header format to include Merkle Mountain Range (MMR) commitments.

Shielded Coinbase – ZIP 213 defines modifications to the Zcash consensus rules that enable coinbase funds to be mined to shielded Sapling addresses. It does not disable the use of transparent addresses in coinbase transactions.

Also worth mentioning is the fact that ZCash (ZEC) has a halving event later this year in mid-November. The halving will happen at block 1,046,400 which is estimated to occur on the 16th of November. With the ZCash halving, mining rewards will be reduced from the current 12.5 ZEC to 6.25 ZEC.

The event exactly four months away and ZCash could have adequate bullish momentum to retest the $75 resistance zone that was last visited in mid-February this year. Other zones of considerable resistance for ZCash on its way up include $64, $66, $69 and $73. 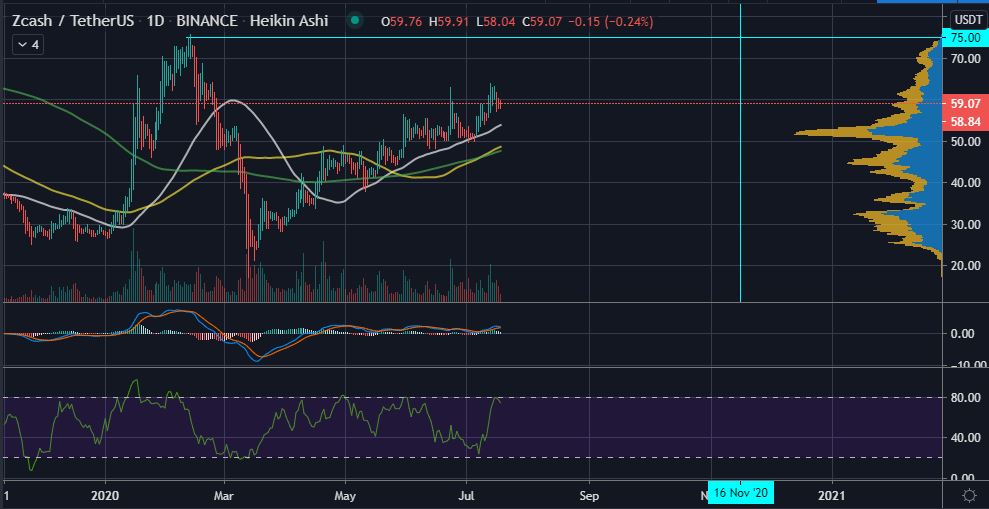 In the meantime, the daily ZEC/USDT chart indicates that ZCash could be due for a pullback. This can be seen through a reduction in trade volume; the MACD turning bearish; and a high daily MFI of 74.

As with all analyses of ZCash, traders and investors are advised to use adequate stop losses. Additionally, having an eye out for sudden Bitcoin movements is highly recommended when trading altcoins.

Disclaimer: This article is not meant to give financial advice. Any additional opinion herein is purely the author’s and does not represent the opinion of EWN or any of its other writers. Please carry out your own research before investing in any of the numerous cryptocurrencies available. Thank you.