Prediction: Divided country not likely to be unified anytime soon

Prediction: Divided country not likely to be unified anytime soon 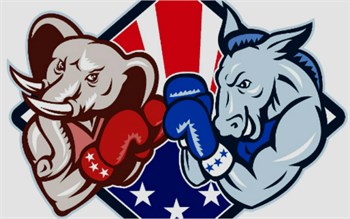 Despite the media's weekend declaration of a Joe Biden electoral victory over President Donald Trump, the president himself has refused to concede while his team moves forward with legal challenges in key battleground states.

On Friday, the Republican National Committee announced it was dispatching legal teams to states where there have been reports of ballot irregularities and intimidation of Trump poll watchers. According to news reports today, the president's legal team is expected to sue Pennsylvania over its handling of the election (see LawSuit below) – and his campaign has requested recounts in Georgia, Wisconsin, and Arizona. Accusations of irregularities have also been levied against Michigan and Nevada.

In total, according to Trump attorney Rudy Giuliani, as many as ten lawsuits could be filed eventually – four or five of them by the end of the week.

"I know the president's team is out in every suspect state, pursuing the truth and [urging] legal ballots would be counted but not the illegal," Maginnis tells OneNewsNow. "So, I think there is still some hope out there [for the Trump campaign]. But if in fact it ends up that Mr. Biden is – quote – elected, then we have plenty of evidence that this country will continue to be divided."

As suggested before the election, the final result could end up being decided by the Supreme Court – which Maginnis predicts could have a disastrous impact.

"If in fact the Supreme Court ultimately makes a decision that puts Mr. Trump back in office and denies it to Mr. Biden, then the left and their Antifa-Black Lives Matter [supporters] will, of course, tear apart as much of the country as they possibly can. That's their modus operandi."

The Associated Press reports that top election officials in the battleground states of Arizona, Georgia, Michigan, Pennsylvania and Nevada – both Republican and Democrat – have all said they see no widespread voting irregularities, no major instances of fraud or illegal activity.

While that squabble remains in the headlines, the Democratic Party – for all its brag and bluster over the 2020 elections – is facing a massive internal war. Some House Democrats, it turns out, are not very happy. Several of them leaked the contents of a caucus meeting last week, and there was a lot of finger pointing going on.

Virginia Congresswoman Abigail Spanberger was one that was sounding the alarm:

Spanberger: "The number one concern and things that people brought to me was defunding the police… We need to not ever use the word 'socialist' or 'socialism' ever again."

Former Missouri Senator Claire McCaskill told MSNBC the Democrats were losing voters because many in their base prefer the Republican take on social issues more than the divisive identity politics of the left:

McCaskill: "As we circled those issues, we left some voters behind – and Republicans dove in with a vengeance and grabbed those voters."

But the far left of the party is having none of it. New York Congresswoman Alexandria Ocasio-Cortez – viewed by many as the spokesperson for "The Squad," a group of "progressive" Democrats – tweeted out after the caucus meeting that those who oppose socialism and defunding the police are racists.

In addition, Justice Democrats – a left-leaning political action committee – boasted that it had added three more "Squad" members to the House, which now boasts 15 members. "Every member of The Squad is headed back to Congress," the group reported. "But we didn't stop there. We recruited another class of progressive champions – and we won."

And they're bringing with them the fight for the Green New Deal, single-payer health care, and higher taxes.

Christian author and radio talk-show host Dr. Alex McFarland says the Democrats have a battle on their hands. "The Squad seems to be growing in both numbers and power," he observes. "The bankrupt ideology of socialism has to go ever more explicit and ever more leftward to appear innovative and relevant."

"We're going to file a lawsuit today," Trump attorney Rudy Giuliani told The Todd Starnes Show. "The lawsuit today is going to involve all of Pennsylvania and produce evidence that Pennsylvania was a complete and absolute disaster."

According to Giuliani, the amount of fraud in Pennsylvania is "overwhelming."

"Well over 300,000 mail-in ballots were counted secretly without any Republican observer allowed to see it, in Philadelphia and even more in Pittsburgh, but there are direct witnesses to that," said Giuliani. "That is completely illegal, unlawful under Pennsylvania law, and those ballots will have to be discarded; they will have to be nullified. They are unlawful ballots. The law of Pennsylvania requires that the Republican Party be given a chance to observe the ballot to make sure that the mail-in ballot is legitimate. We all know how much fraud can happen with a mail-in ballot."

The lawsuit in Pennsylvania will also involve the backdating of ballots.

"Ballots that came in on November 4 were backdated to November 3," Giuliani explained. "[The lawsuit] will involve the voting of dead people and [those] whose votes were changed, including in some cases after the vote was cast. And it will ask for the disqualification of all those votes and that the election in Pennsylvania cannot be certified by the legislature until these votes are removed, which would be more than enough to make Donald Trump the winner."

Giuliani also claimed that people were intimidated and are willing to testify. "[These are] poll watchers who were intimidated, who were not able to watch the polls; and we have a significant electronic problem with a system called Dominion."

Similar lawsuits are expected in Georgia and Michigan.

Article written by Chad Groening, Steve Jordahl, and posted on the OneNewsNow.com website.